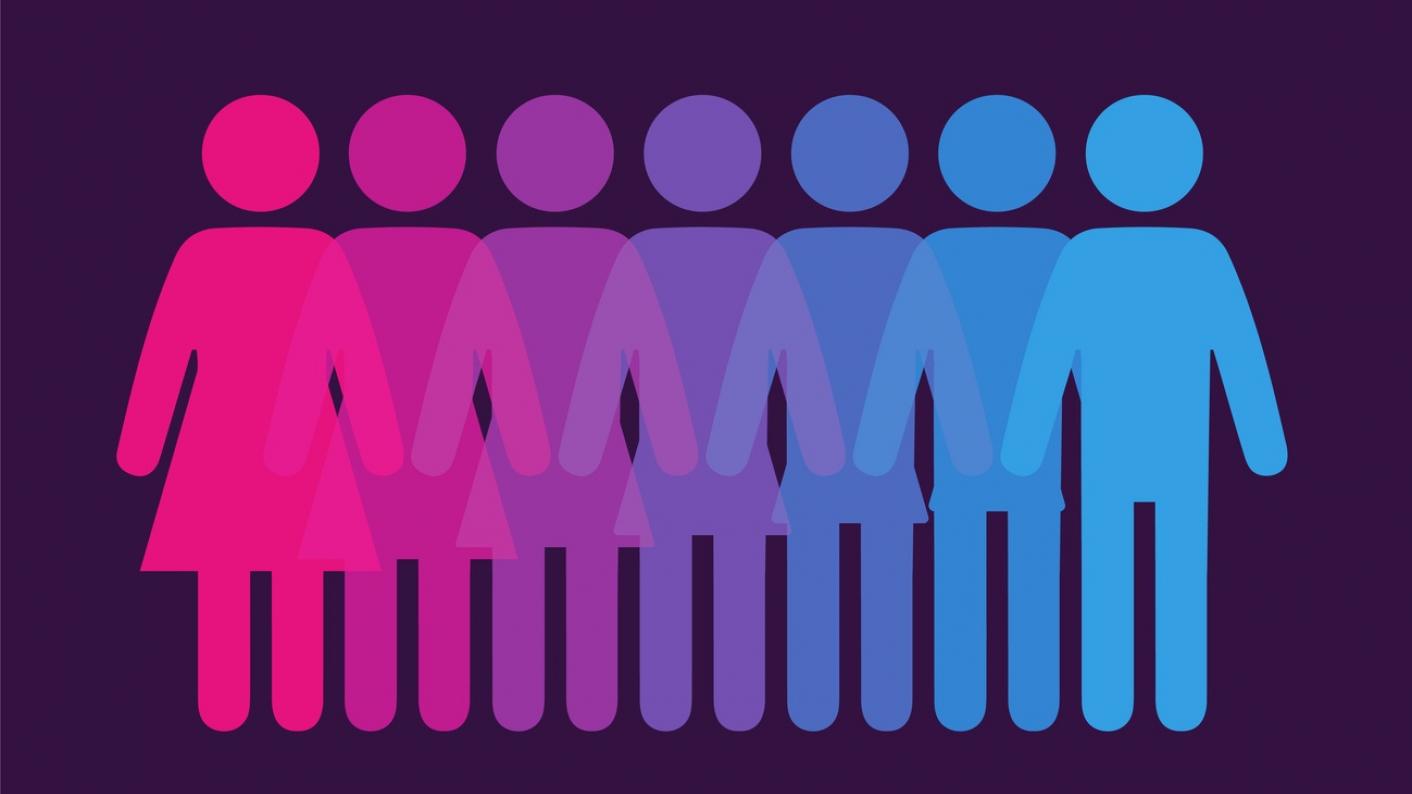 The word gender has become a bit complicated. To some people, it just means whether you’re a boy or a girl, or what parts you have. Academically, it means the set of behaviours or feelings associated with one’s gender identity, which can be male, female, trans, non-binary or a host of other things. As an actor, I find it most useful to think of gender as two separate elements; behavioural and expressive. These words are borrowed (and slightly bastardised) from Mary Overlie’s Viewpoints and aim to separate the internal from the external elements of a character.

Behavioural gesture (as I’m using it) refers to the more concrete facts: the skillsets the character has, and the choices they make. Behavioural gesture includes point of view, beliefs, motivations, and anything that affects what the character does as a human. For example, if your character asks for a raise at their job, gets angry at someone, goes to church, gives out sandwiches at a food bank, stays home to raise their children, knits their own socks, etc, that’s behavioural.

The behavioural gesture of gender is wide-reaching. From motivation (does your character want to get married? Have children? Be in charge?) to skill-set (does your character know how to Sew? Change a tire?), to learned behaviour (do they dominate a conversation or listen more? Do they pick up after themselves? Back down from an argument?), we associate many behaviours with gender (and vice versa). In 2018, still, we could easily separate these into gender stereotypes; women on the more nurturing side, men on the assertive side. We all know individuals who break these stereotypes, though; so why do they still exist? It’s largely tradition and convenience at this point.

The Bechdel test is a simple bar set by Alison Bechdel, a well-known comic book artist. To pass it, a movie or show needs to have one scene with two or more women (or non-male characters) talking to each other about anything besides men. It sounds like it’d be easy, but the vast majority of movies still fail it; women are too easily portrayed as having no goals or interests outside of their relationships with men. It’s a great example of behavioural gesture! Do your shows regularly pass?

Expressive gesture (as I’m using it) is what you see on the outside of a person or character. How they speak, how they move, how they sit and stand can all make up our impression of whether a character is more masculine or feminine, or a mix of the two. These are the bits that we usually notice first, or need to choose first when going on stage, and so they tend to get the most attention when we choose to play a character of a different gender than our own.

Both of these gestures are largely made up of learned behaviours. We learn what gender is from watching how our parents and family members do it, from other children at school, from tv and movies, and even from strangers in the street. We know that many of these gestures are learned because they vary wildly between cultures and even in our own cultures over time. People in different parts of the world have such different ideas of what ‘masculine’ and ‘feminine’ gestures are that they can’t be entirely inherent to our biology.

The idea that we make gender what it is by doing it is great for performers to realise because it means that we’re constantly performing gender for each other. We learn what it is to be a man or a woman or other genders by watching how the people around us do it and performing it back to them. As actors we’re already champion people-watchers; thinking of gender as a set of gestures that we all pick and choose from gives us a whole host of new things to look out for and use.

As humans, this is also super interesting because it means that gender is constantly being broken and remade. What did it mean to be a man or a woman in your parents’ generation? Their parents? What might it mean in 20 more years? Will people in 100 years look back and think it was absurd to assume men and women would behave differently at all? Gender changes as fast as people change, which can be fast for individuals but slow for whole groups.

What associations do you have with gender? Do men and women behave differently? What about boys and girls? How many people do you know who aren’t a man or a woman, or who weren’t always the gender that they are?

We all know intellectually that we’re individuals with lots of agency to learn new things, act in different ways, and generally be ourselves in whatever way suits us. It’s very easy to generalise about others, though; we often do it just for efficiency. Who has time to learn all of the gestures, likes, dislikes, patterns, etc about every single person we encounter? It’s easier to assume women are broadly one way and men another, even if we’re open to being surprised. That doesn’t mean it’s good or bad, it’s just a thing we tend to do. We often even tell beginner improvisers to do the most obvious thing, which is sometimes a stereotype, just for efficiency. When we’re playing a character, though, all of this is up in the air. They could be anything, so why not use all of the options available? If you’ve been improvising for more than a few years, you’ve probably seen ‘generic female character’ enough times. So, what are the other options?

The character of Ripley in the movie Alien was famously written for a man or as gender neutral. Jodie Foster has taken on male roles and made them her own, and recently Jodie Whittaker took over the role of the doctor in Doctor Who. (Isn’t it interesting that fewer men seem keen to take on women’s roles? What does that say about how we write for men vs women, and how we value men vs women as people?). If you don’t play women often, try playing any other character you were already going to play, but as female.

When we invent a world in an improv set we can invent any and all parts of it, and that includes gender. We can pick and choose elements for our own characters, and we can also invent worlds where it’s radically different or doesn’t exist at all. We can choose to play a whole show as members of the mythical all-female Amazon tribe. We could play in a world like in Octavia Butler’s books, where nobody has a gender or sex until mating season when they’re surprised to wake up with one set of parts or another, or where there are three sexes. We could play a whole set where we have magical powers and can transform ourselves physically to look like other people of any sex or gender. The more aware we are of different possible options, the more varied and interesting our characters and shows can be.

If you’re a man who was born a man and is comfortably masculine or a woman who was born a woman and is comfortably feminine, trans, gender fluid, and non-binary identities can be difficult to understand. If it’d never occur to you to want to be a different sex or gender, people who do must seem very foreign. As improvisers and actors, though, what makes people tick is always of interest, as is the mental flexibility to imagine a very different experience to your own. Try this; imagine yourself as a child, being obliged to play with nothing but children of the opposite sex. Imagine everyone assumes you’re just like them, and when you fail to be you’re chastised and embarrassed. You know you’re different, but you don’t have any frame of reference to use to express it. This might be amusing, slightly strange, or downright uncomfortable; all three are often experienced by trans/fluid/NB people. It’s easy to focus our ideas of trans people in particular on what kind of body parts they have/want, but as actors, the point of view and life experience is what’s going to get us the most juice out of a character. As humans, this is what gains us the most empathy.

It’s also good to notice that as actors the masculine v feminine* aspect is much more interesting than the male/female. I’m not super inspired to play a character who definitely has a penis, but one who worked on cars with their dad every Sunday and doesn’t like to cry in front of people? Super juicy. Equally a character who likes to take care of people, craves social justice, commands a room, is afraid of intimacy, pleases others at their own expense… This is what we’re here for, surely?

As people, rules about how men and women are supposed to behave can feel a bit constrictive, especially if they don’t suit you. As actors, we have the skills and opportunity to break these perceived rules and norms up into a set of tools that we can use to make an infinite number of characters and worlds. Cool.

*these ideas are largely made-up, but I’m using them anyway because most of us have lots of ideas about what they mean.